What’s All the Fuss About Starlink 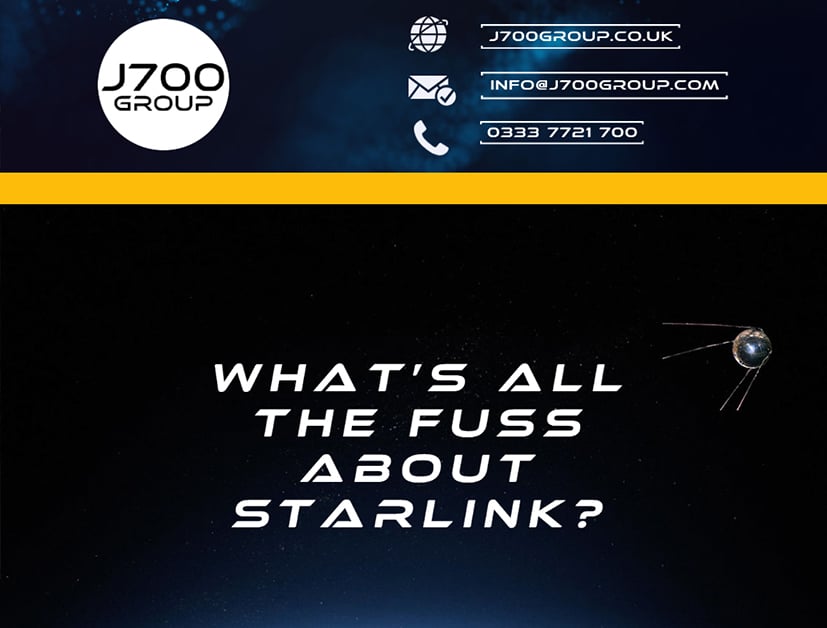 In this article, we take a look at what Starlink is and why it has been making the news in the last couple of weeks.

Starlink, operated by billionaire Elon Musk’s SpaceX company uses a constellation of low orbit satellites around the earth (launched by SpaceX rockets) to provide broadband internet. Starlink provides satellite Internet access coverage to most of planet and is particularly useful for areas where connectivity is unreliable or completely unavailable.

Starlink says that users of its satellite broadband can expect to see download speeds between 100 Mb/s and 200 Mb/s and latency as low as 20ms in most locations.

Starlink customers are sent a kit which includes the Wi-Fi router, cables and base that enables them to connect to their satellite broadband. Being a satellite connection, however, users need to have a clear view of the sky to connect and need to download the Starlink App to determine their best install location.

Can Be Seen In The Night Sky

Starlink’s satellites can be seen with the naked eye as a bright, equally spaced line of star-like objects orbiting in a line/train. This has led to criticism by astronomers that the SpaceX satellites are ruining their observations. Astronomers also say that in addition to the amount of light reflected by the satellites, there are also the problems of diffusion of background light and the radio noise from the satellites. Back in June 2020, SpaceX responded to the criticism by developing a new strategy to reduce the amount of light Starlink satellites reflect down to Earth. Starlink says that it now leads the industry in innovations to reduce satellite brightness, minimising the impact on astronomy. The company says that it is also testing rolling satellites, so the vector of the Sun is in-plane with the satellite’s body, i.e., so the satellite is knife-edge to the Sun.

Starlink suffered a costly setback recently after 49 satellites it launched in one mission were burned up in the earth’s atmosphere only days later costing the company $50 million. The failure was caused by a sun storm/geomagnetic storm. These storms, sometimes called ‘space weather’ happen because of explosions of plasma from the surface of the Sun and solar winds escaping Sun’s outer atmosphere. The result of these fluctuations is that electrons, protons, and other particles are blasted out from the sun into space. When this happens, as in the case of the recently launched satellites, the earth’s atmosphere absorbs the solar storm’s magnetic energy, heats up and expands upward. This expansion creates drag on satellites, and it was this drag (while the new batch were in their lower dropping off orbit i.e. between 60 and 120 miles/100 and 200 km) above the Earth’s surface, that caused them to fall towards earth and burn up.

Is This Your Space Junk?

So-called ‘space junk’ (debris orbiting the earth/orbital debris) is a big problem. NASA (2021) said that the Department of Defence’s global Space Surveillance Network (SSN) sensors are tracking more than 27,000 pieces. Also, the European Space Agency estimates there are now 36,500 pieces of space junk larger than 10cm. These pieces of natural meteoroid and artificial (human-made) orbital debris include non-functional spacecraft, abandoned launch vehicle stages, mission-related debris, and fragmentation debris. The significant dangers are that are that debris and spacecraft are traveling at orbital speeds (approximately 15,700 mph in low Earth orbit), and any impact of even a tiny piece of orbital debris with a spacecraft could create catastrophic problems.

Recently, astronomers accused Elon Musk’s SpaceX firm as being the company responsible for an abandoned three-tonne rocket part that they had been tracking since 2015 and which was on a collision course with the moon, travelling at 5,500 miles per hour. On colliding with the moon, the part is reported to have left 65ft crater. Elon Musk has confirmed that the part did not belong to SpaceX, and it is now believed that it was a part of a Chinese rocket.

Starlink also made the news last week after Ukraine’s President Volodymyr Zelensky asked for Starlink internet terminals to be sent as Ukraine’s broadband infrastructure was damaged in Russian attacks. As well as being able to work in any areas where there is a clear view of the sky and not dependent on ground base infrastructure (apart from somewhere to mount the dish) President Zelensky has also commented that Starlink is the only non-Russian communications system still working in some parts of Ukraine in the wake of Russia’s invasion. Elon Musk, who communicated personally with President Zelensky, has now donated Starlink satellite internet terminals to the embattled country.

Thanked, But A Warning

Ukraine’s vice prime minister, Mykhailo Fedorov, tweeted his thanks to SpaceX’s billionaire chief executive officer Elon Musk for help, including a photo of the truck, loaded with terminals. President Zelensky has also expressed his thanks.

There have however been warnings via Twitter from Scott-Railton, a senior researcher at the University of Toronto’s Citizen Lab project, that the terminals could become targets and beacons for Russian air strikes. Concern has also been expressed that the dishes would need to be installed in vulnerable locations for the system to work.

The crisis in Ukraine has highlighted how useful the often-criticised Starlink system can be and has illustrated its advantages overs traditional ground-based systems operated often through state control. Although it can’t fully replace terrestrial internet on a large scale, it is likely to provide vital communication links where they’re needed.

The speed with which Elon Musk responded and the fact that he became personally involved, which could hold a risk for him in the future, is also likely to have a positive impact on his public image which could rub off on his SpaceX and Starlink businesses. It remains to be seen, however, whether the Starlink terminals, and even the Starlink satellite operations end up being targeted by physical and or cyber-attacks.

As an experienced IT Support Provider, helping businesses across Lancashire & Manchester, if you need any assistance with your IT including IT Hardware, a Disaster Recovery Policy or Managed Backup Solutions; Contact Us today on 0333 7721 700  to see how we can help your business.